Maarten Bruggeman has been a Gemini man right from the start. He joined the company in September 2011, partly in order to arrange the licences. As Commissioning Manager, he is now responsible for ensuring that the execution runs smoothly. A job that he takes on with pleasure. ‘It’s still people work.’ 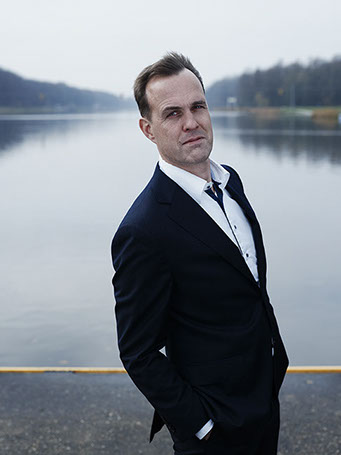 An impression of the app that Maarten uses on his telephone to monitor Gemini’s progress. Left and right the two sections of the wind park, with a total of 150 turbines in various stages of ‘readiness’.

‘A good project manager understands which problems there are and that you can’t solve everything alone. That distinguishes him from the specialists, who sometimes suffer from tunnel vision.’ That’s the view of former marine engineering officer and helmsman Maarten Bruggeman. It seems he also has the right name for his job, as ‘Bruggeman’ means ‘bridgeman’ in Dutch. While at first he quite literally stood on the bridge (among other things, he was a helmsman for the Holland America Line), he now creates bridges between the operating parties. At the end of the last century, he joined HVC, one of the Gemini shareholders, as a project manager for large and complex onshore projects. ‘I coordinated the execution of a large waste energy plant in Dordrecht, for instance. I also had to deal with all sorts of laws and regulations there, such as the rules on Environmental Impact Reports and the entire licensing process.’

It was that specific knowledge that led the HVC management to add Bruggeman to the Gemini team. He took part in the entire preliminary phase and during the execution, was assigned the task of Cable Installation Manager, in order to ensure that all cables to and within the wind farm were installed with care. The project has now progressed further and he has undertaken the role of Commissioning Manager: ‘I bring the different disciplines together and make sure that the operating companies obstruct each other as little as possible.’ The biggest challenge in doing that? ‘The weather, by far. That has an enormous impact offshore. I have sailed, and then you know the elements. That helps in being able to estimate what sort of influence changes in the weather can have. The crux for us is to make the best possible use of the weather. The entire organisation is geared to that, and Van Oord, with years of experience at sea, is certainly a master in that respect.’ Some construction activities at the wind farm can continue all year round. Others are halted for a time. ‘Cable laying was halted in November, and we were able to start again with this on 15 March. The chance of workable weather was simply too small in that period. The significant wave heights were too high for cable installation.’

Bruggeman says that it is his job to allow Van Oord and Siemens to operate with as little disturbance as possible: ‘Siemens is commissioning for the turbines, while Van Oord does the onshore and offshore high voltage stations and the electrical connections to the foundations. That interface has to be managed as effectively as possible. Everything has an impact. For example, a cable ship must not get in the way of a turbine installation vessel.’ On his phone, Maarten can monitor progress live, 24/7: an interactive map shows exactly who is working where. ‘We can see where every individual employee is. That is also an important aspect of safety. All employees check in and out again at each location. One of our employees works full-time to coordinate the manning of the Gemini team at the farm. That is another characteristic feature of working offshore: you can’t just pop into the building site for a minute and improvise something. Everything has to be planned.’

Article continues under the images 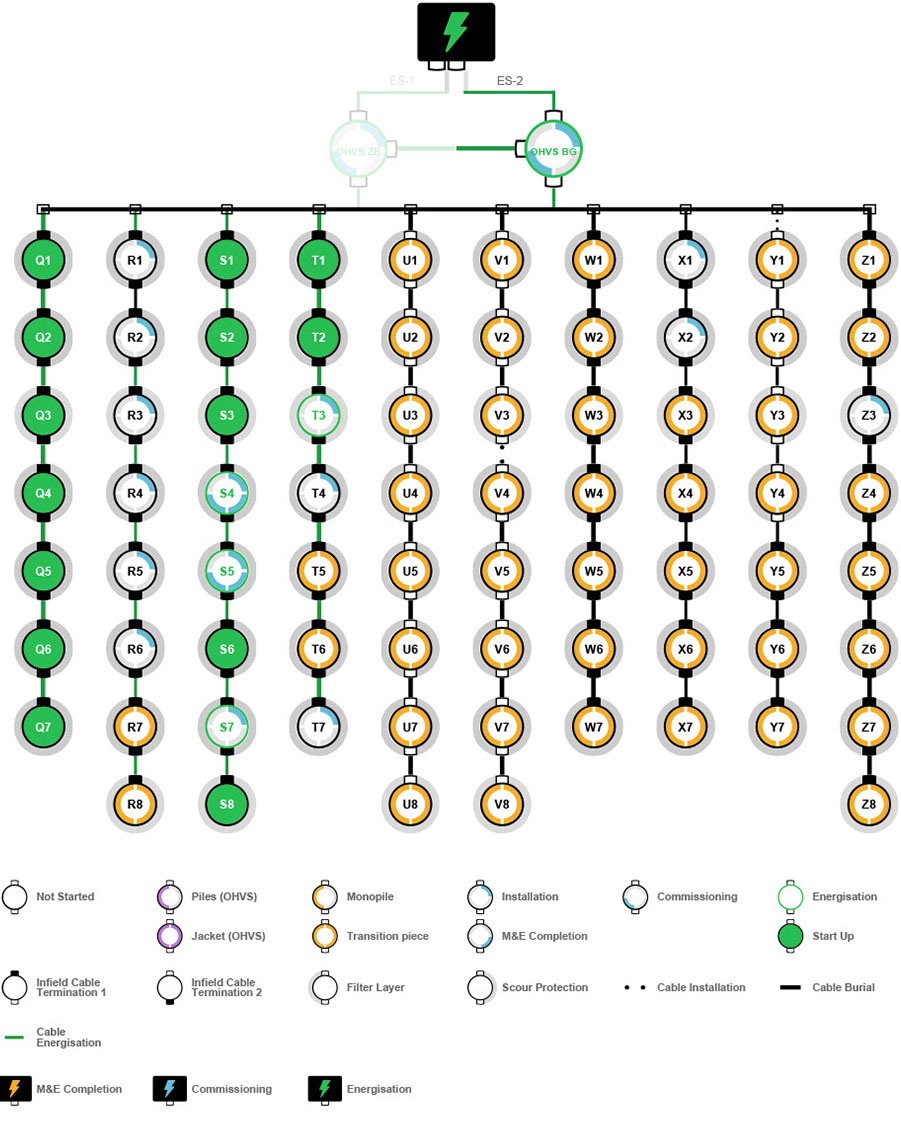 A schematic overview of one of the sections of the wind park. The process of both the cables and the turbines is tracked in real time. From the foundation, through the installation of the turbine parts, right up to connecting and putting into operation.

The map also shows which turbines have already been commissioned and are generating electricity. In that sense, 29 February 2016 had a special significance: ‘That was when we had first power. The first electricity reached land. It was a real milestone: the installation concept has proved itself.’ The period before that had already been an exciting one, with more than 150 foundations that had to be installed within six months (it took 110 days). And there was the moment in mid-December 2015, when the ‘high voltage’ test was completed successfully. ‘It might sound like blowing our own trumpet, and it certainly isn’t meant that way, but at a certain point, you do get used to all those successes, one after another. We certainly have to avoid taking that for granted. So we still try quite deliberately to mark every milestone. After all, for an installation manager, it is a very special moment when something he has worked so hard for does actually work in practice.

Looking back, Bruggeman is already very proud of the results achieved. ‘There is no other offshore farm that performs like Gemini. Achieving that, with a compact organisation and little equity - I do think it’s special. This consortium was certain no ‘established order’ when we began. Many people said: ‘They’ll never manage that’. I don’t hear that kind of thing any more.’ He praises the team spirit and the cooperative culture, with a varied group of different nationalities: ‘That’s the nice thing about projects like this one: it remains people work. We all have a single goal: to achieve the project. It’s a pressure cooker. What can take 10 years in a normal organisation can all happen to you in a single year here. I enjoy that.’