Power in the sea bed

Gemini Offshore Wind Park generates an unprecedented amount of energy. But how does all that electricity reach the shore? This is achieved through two export cables. Their joint length: more than 200 km. In the spring of 2015, they were laid on the bed of the North Sea. Or better said: they were safely buried in the sea bed. A remarkable performance. 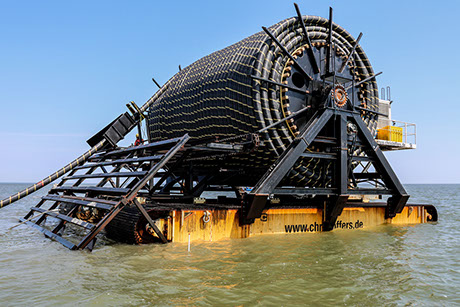 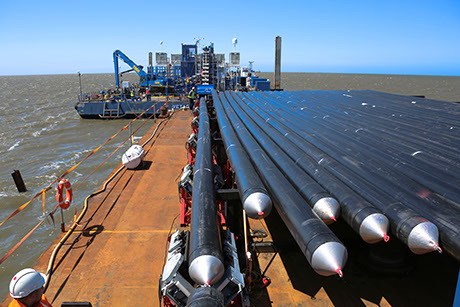 With the aid of Rijkswaterstaat databases, among others, the geomorphology of the sea bed is mapped out, in order to be able to determine the routing of the cables. They are then dug in, at some locations at a depth of as much as 12 metres below the sea bed. In particular, this was the case north of the Rottumerplaat island, where the sea bed is very dynamic and the current is the strongest. This required a considerable amount of dredging work (8 million m3). Specific equipment is also used to bury the cables beneath the sea bed. Among other things, the phasing of this work takes account of the suckling season of the seals in the area. In one case, horizontal directional drilling took place in the sea bed, in order to be able to cross existing cables in the sea bed. Innovation and the application of new technologies are therefore an inseparably linked to this part of the realisation of the wind farm.

The electricity is transmitted through the cables at 220 kV, and is converted to 380 kV onshore, in the transformer station. It is then delivered to the national electricity grid. In principle, the cables will require little maintenance, as they were laid according to the ‘bury and forget’ principle. However, there is no question of really forgetting about them: the cables are continually monitored, using a Distributed Thermal Sensing (DTS) system. This shows the temperature in the cable at every location. In addition, a survey of the cable position is conducted once a year. This ensures the safety of shipping and the environment, among other things.

It is an operation within an operation: connecting two transformer stations and transporting the electricity generated to land. It requires more than 200 km of export cable, a length that has never been applied before. Although the cable has a modest diameter of about 30 cm, the weight is very respectable: between 90 and 104 kg per metre. Just roll up the entire length and try getting that aboard a ship: it can’t be done. The cables, produced by the German company NKT in Cologne, were therefore delivered in sections and were connected and made watertight with large thermoplastic connectors. The result: 16 to 32 km of cable, which could be loaded by the new installation vessel Nexus – a ‘masterpiece’ that passed the test with flying colours. Various techniques were used to connect the cable sections, from a ‘harbour joint’ in the port of Rotterdam to ‘inline joints’ offshore. . 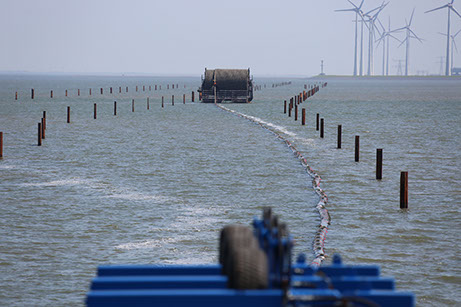 From January 2015, the cables were laid in different phases between the shore - the transformer station in the Eemshaven – and the wind farm. This was preceded by a phase of detailed research. For the sea bed is no ‘virgin soil’, where a cable can simply be buried unseen. Onshore, the underground is full of cables and pipelines, but this is the case offshore too - both old and new ones, from oil pipelines to telecom and electricity cables. Add to that everything that has fallen off ships, the remains of two world wars and a sea bed that is continually changing with the currents. Requirements relating to nature, the environment and culture also play a role. For 15 km, the cables pass below the Dutch Wadden Sea intertidal zone: Natura 2000 area and Unesco world heritage site. Naturally, safety is an important issue. It is necessary to prevent anchors or fishing nets from reaching the cables. If, in the worst case, one of the cables nevertheless malfunctions, the other connection can carry at least 70% of the total capacity (600 MW) to the Eemshaven. Cables and transformers are geared to this.

Laying many kilometers of cable