Between technology and money

stands on the bridge

It is a business within the business: the management of the multi-billion operation known as Gemini. Impressive achievements are realised offshore, but the same applies for the financial structure built up on land. The person responsible is Chief Financial Officer (CFO) Arend Drenthe. Time to get to know him a little better: what gives him energy? 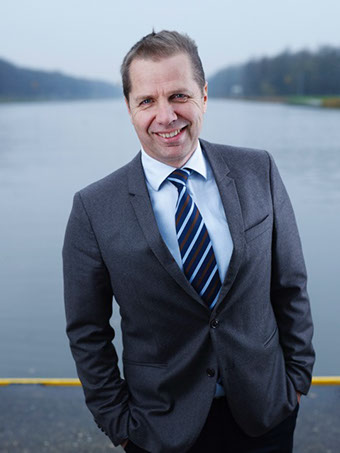 a second house in France

He does justice to his name, for he was born in Valthermond, in the province of Drenthe. ‘We spoke the Groningen dialect and across the street, they spoke the Drenthe dialect.’ However, Arend Drenthe was soon to disappear from the region of his birth. With a father who was a smith in their village, engineering was part of his life from his earliest childhood. His logical decision to study mechanical engineering took him to Groningen, after which things moved fast. ‘I came into contact with the Hollandse Constructie Group through my first job application after graduating. They worked throughout the Netherlands, and so they asked me ‘Where do you want to work?’ I had Pekela in mind, but they said I would learn the most in Leiden. So that’s what I chose, very impulsively. But I still live there now.’

At a subsequent employer, a subsidiary of HBG that supplied pipelines for offshore oil and gas production, Drenthe was set on a decisive course for his career. ‘You’ve got a head for figures’, he was told. With an MBA from the Erasmus University of Rotterdam, Drenthe added punch to his ambitions. ‘At a certain point, you wind up in a particular spot. For me, that was the interface between technology and finance. I am happy with that; you stand between the parties and look in two directions. I know what I need to know about both fields and can consequently also explain it to other people in a way they understand.’

After working for Heerema and Strukton, where Drenthe increasingly moved into financial work, the time for a new switch came in 2013. Once again, it was a question of intuition. ‘I was 54, and then you think: what am I still going to do now? I regard freedom and enjoyment of my work as very important and was very specifically looking for that in a new challenge. I read in the Financieel Dagblad that Northland Power had arrived in Europe and had acquired a share in Gemini. In response to that, I spontaneously sent an e-mail to Canada, asking if they still needed people. At first, the answer was ‘No’, but in the spring of 2014, I got a call after all.’

Gemini proved to be exactly what Drenthe was looking for - probably unconsciously: ‘I had become very ‘corporate’. I did have 25 years of offshore experience, but hadn’t done project financing before. I was given that opportunity with Gemini.’ The job satisfaction and freedom proved to be there in ample measure: ‘At other companies where I have worked, the heart of the business often lay in the building and with the clients. Nothing wrong with that, but then the finances are far more likely to be a side-issue. And then you don’t count as a full member of the team. At Gemini, things are different. If we in Finance drop our guard for a moment, things can go badly wrong with the project.’

When he joined the company in May 2014, Drenthe had to set to work right away: ‘On 14 May 2014, there was the ‘financial close’, the settlement of all financial agreements. But there wasn’t much more than that. It was up to me to build up the financial and supporting organisation. And above all, to secure the financial stability of Gemini. That is what forms the basis of the trust of the parties that invest in us.’

After he had hired a controller, a start could be made on the financial structure that forms part of the basis of the Gemini operation. ‘We opted for a pro-active approach. In short, we keep our shareholders and financiers well-informed. There was no instruction manual for how we should do that. I enjoy thinking up ideas for that myself, such as the Bank Visits and the BankersDay that we organised for the first time in 2015 and to which all banks were invited. It’s good to see something like that catching on and working. But the same applies for the Compliance House, for example, which we built up together and in which all accounting requirements come together. I didn’t want endless check lists. That doesn’t work. We did design a much more compact system, that everyone welcomed. And if you then hear from parties that ‘This is beyond all expectations’, that gives you a feeling of pride. It means that we did manage to get that off the ground well together.’